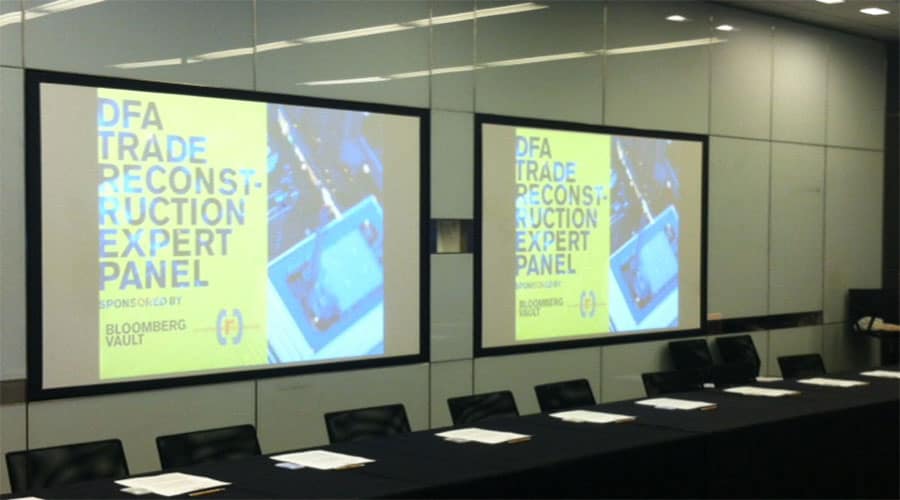 To appropriately “kick-off” the session, Mitch Avnet, Managing Partner at CRC framed the day’s events by initially providing some compelling statistics regarding the overall impact of Dodd-Frank on the financial services sector.    The following examples were provided:

Mitch Avnet at the polls

Of particular concern to firms and compliance officers is the fact that Congress did not estimate the cost of compliance for each of the rules.  One thing is clear - it won’t come cheaply.  Besides the expense of the 11,625 employees, there will likely be new systems, processes, technology resources, etc. whose costs are likely to be significant.

The overall purpose and goal of the session was to create a forum where the representatives of the attending swap entities could openly share their pain points as well as some of the solutions that have been leveraged / implemented to date - specifically around structured and unstructured data sets.

Throughout the session, several common “themes” emerged.  Some of the general highlights from the session included:

Some of the more significant challenges expressed by the expert panel during the session included:

The following commentary and perspectives were captured throughout the session:

All firms commented that identifying and capturing pre-execution data is challenging.  All firms state that they do record.  One Firm stated, “We have a manual process to gather the unstructured data.  The derivatives are highly negotiated and there is a lot of unstructured data to parse through.  For a three year swap the challenge is significant.  The ideal would be to tag the conversation with a trade but there is no way to tag it up front.”

Firms found it difficult to find the applicable conversations.  “If the customer spoke with several different people, how do you find the conversation, unless it is tagged with LEI?”  Even when a firm is recording a phone line, firms can’t tag the conversation to a trade.  Another firm is trying to tie the data to a phonebook and is attempting to scrub the data in the current Customer Relationship Management (“CRM”) system to meet this requirement.  Many commodity transactions are coming through brokers and that data isn’t in CRM systems.  Based on this, firms don’t know how to search for the commodity brokers conversations.  The phonebook will end up being key.  Tagging voice recording is a challenge.  To add to that challenge - incoming phone numbers are often blocked.

Given the lag in technology and ability to record cell phones, most firms have restricted cell phones and voicemail from use for discussing any swap transaction.  One firm turned off voicemail completely.   Another firm requires individuals, who are not recorded, to call a recorded turret line if they are going to discuss a swap transaction.    In regard to recording Polycoms, most firms have a policy that Polycoms cannot be used to discuss swap business.  However, at least one firm has a policy that if swap business is carried out on a Polycom that the Polycom must conference in a recorded line.

The larger the firm the longer the turn around time for producing voice records.   Some firms referenced that fact that the data coming from the voice-recording servers isn’t accurate and they can’t do analytics down stream.  Minimizing the individuals who have to be recorded is a difficult task.  Questions to be asked include: Who are the people who executed swaps and related hedges to those swaps? – and, Are they booked in different jurisdictions?   Most firms record anyone who has access to trade in any of the trade systems.  In one instance, a firm is recording for the entire front office.  However, in the event an individual moves from one desk to another the firm has tried to involve business management, to help control the process, however IT is resisting including business management in the moves.  One firm is taking the approach of making more individuals APs to ensure that everyone is recorded.

One firm stated that everyone outside of United States was already recorded.  However, the time-frames that recordings were maintained were different from jurisdiction to jurisdiction.  For this particular firm, recording in the United States was a challenge.   For another firm, some middle office people were already recorded.  Other firms limited recording to the front office.  Another firm only recorded APs.   Human Resources (“HR”) systems present a potentially significant challenge.   If HR systems are not updated on a timely basis and an individual moves into a position that requires recording, that individual may not be tagged in a manner ensuring their phone conversations are captured.

One firm is moving from analog to VoIP for voice recording.  However, the lag that occurred with respect to the firm’s internal approval process put the firm in a difficult position with its voice-recording requirement.  VoIP isn’t fully UTC compliant and one firm still has 6 to 9 months to go to have the VoIP in place and UTC compliant.

Pre-trade mid-market verification and certification has been a significant challenge for one Firm.  This firm is finding they need to listen to hundreds of hours of voice recordings.  One firm only allows pre-trade marks to be given orally, only if the AP follows up in writing.

Firms recommended testing the recordings often so to ensure the data is actually being recorded.

For swap trade reporting, one firm stated that they did build a database.  With that said, as it related to other aspects of trade reconstruction, the process is manual and is documented.   One firm stated, “If a regulator made a request we could attempt to reconstruct and test, however we would never make the 72 hours.”  From an IT perspective, the data can be produced within hours; however the compliance effort in parsing through for relevant data can extend the process by days and weeks.  Currently, none of the firms said they could solve trade reconstruction within 72 hours.  However, if the counterparty could be tagged on the voice records, a few firms felt they had a chance of complying within 72 hours.

One firm stated that they had no tagging by Legal Entity Identifier in place.   Due to the amount of time compliance is spending trolling through voice data, some firms find that the data needs to be linked to the LEI.   While LEI is not required to be linked to pre-trade data, for search-ability purposes, records maintained without an LEI are arduous to identify.

Another challenge is whether data is WORM compliant.   BASEL has made WORM compliance a significant priority for some firms.  Historically most of the firms attending the session were in compliance with 17a-3 and 17a-4 from a trade record perspective.  However, globally firms need to look at all WORM technology.  In regard to WORM, the global swap dealers in attendance have received substituted compliance for locations outside of the United States. Firms also expressed a concern with the high cost of fully implementing WORM.

One of the bigger challenges that firms have with becoming UTC compliant is the fact that records cannot be stored in native time and then be converted to UTC.   All firms agreed that they are not fully UTC Compliant in all systems, specifically due to the fact that most systems store native time but still need to convert to UTC.  In conversations with the CFTC about native time conversion to UTC, timeframes that firms had suggested were not aggressive enough.

During the session, time was carved-out for an “unofficial” survey of the participants. View the survey and the results below:

Toward the end of the event, participants were given the opportunity to weigh-in and provide topics and concepts for future discussions.   These included:

The event concluded with a “recap” of the overall discussion and themes that emerged throughout the session.   The group agreed that the session was informative and collaborative – and would welcome the opportunity to attend future sessions.   The next potential session is tentatively scheduled for Late September / Early October 2014.